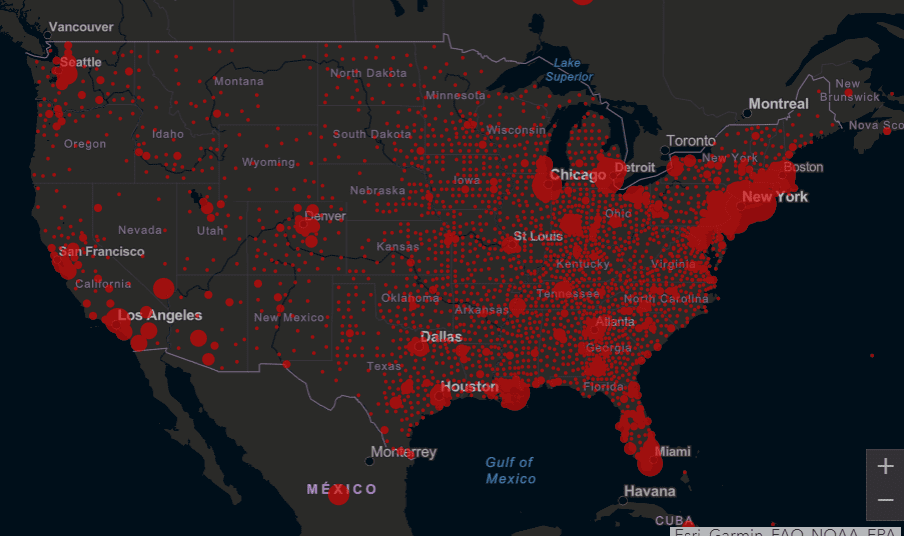 All but one of the main Department of Energy nuclear weapons production sites have now hunkered down into minimum mission-critical operations because of COVID-19, keeping only the personnel needed to assemble nuclear weapons and components, maintain key infrastructure, or provide security.

The Pantex Plant in Amarillo, Texas, and the Y-12 National Security Complex in Oak Ridge, Tenn., both announced the switch to minimum mission-critical operations this week, joining the Savannah River Site of Aiken, S.C., which adopted a similar posture late last month.

Only the Kansas City National Security Campus, which sits in the middle of a far worse outbreak than Pantex, Y-12, and Savannah River combined, had not gone down to the minimum mission-critical level of operations. The plant, which makes the non-nuclear parts of nuclear weapons, has reduced the number of people onsite since the outbreak and confirmed its first case of COVID-19 this week, saying Friday an employee “recently tested positive.”

Locking down the Oak Ridge, Tenn., campus will take about two weeks. Unlocking it, whenever safe to do so, will take another two weeks, according to the Bechtel National-led contractor for Y-12 and Pantex, Consolidated Nuclear Security (CNS).

Pantex, meanwhile, will keep running all three of its usual shifts. The plant assembles and disassembles nuclear weapons for routine maintenance and major refurbishments. Like Y-12, Pantex will expel from the site anyone who could be teleworking.

“Reducing staff on site will help reduce the risk of further spread of COVID-19, and we will continue to protect our workforce while securing the site and maintaining mission capabilities,” a Consolidated Nuclear Security spokesperson wrote in an email.

Pantex normally has about 3,500 workers on site, and Y-12 normally has about 6,000 personnel, including construction workers. The CNS spokesperson would not say how many would remain on-site after the transitions to minimum mission-critical operations are complete.

Pantex and Y-12 were previously “in normal operations with maximum teleworking,” the spokesperson said. Both sites have confirmed COVID-19 cases and quarantines, but the spokesperson would not say how many.

Meanwhile, Consolidated Nuclear Security saw a silver lining in the crisis this week when President and CEO Morgan Smith emerged from quarantine Tuesday after learning a symptomatic individual with whom he’d had contact tested negative for COVID-19: the respiratory disease caused by the novel coronavirus that broke out in Wuhan, China, last year.

NNSA production plants, like other essential facilities inside and outside of government, do not test every employee who comes to work each day for COVID-19. Such an abundance of caution is rare, though the White House does now require testing for anyone who will have contact with President Donald Trump or Vice President Mike Pence.

Pantex and Y-12 will attempt some contact tracing if they hear of a positive test result, but “all testing is done off-site,” the CNS spokesperson said. Those tested for COVID-19 are asked — not required — to report the test and its result to their site medical officer.

If Pantex or Y-12 get notice of a positive test result, they will interview the infected and their managers to figure out where the sick had been, and who they had been near before showing symptoms. Even people who do not feel or appear ill can transmit COVID-19, so contact tracing at the two facilities covers employee movements at least two days prior to the onset of symptoms.

Things are much the same at Savannah River Site, where, pandemic notwithstanding, NNSA-funded workers are still extracting tritium for nuclear weapons and planning the massive plutonium pit production plant, the Savannah River Plutonium Processing Facility.

Earlier this month, weeks after confirming its first case of COVID-19 on-site, the sprawling South Carolina campus disclosed that it had tested 24 workers for the disease. About 10,000 people work at Savannah River, ordinarily.

The results of sorting by symptoms at NNSA production sites generally mirrors what happens outside the fences: some people get sick, but more people wind up in quarantine, monitoring for symptoms and working at home if they can, like Smith did.

Pantex, Y-12, and the Savannah River Site have all acknowledged as much over the past several weeks, though neither they nor NNSA headquarters regularly quantify the number of quarantines. In late March, Savannah River said it had around 100 people in quarantine.

Meanwhile, at the Kansas City National Security Campus, which added a senior leadership change to its juggling act this month, “a small group of employees” are quarantining after possibly coming into contact with the one person at the site who has so far tested positive for COVID-19.

That acknowledgement Friday was the first new statement the plant has made about its response to COVID-19 in nearly two weeks.

Kansas City — the city alone, excluding surrounding counties — had 257 confirmed cases and eight COVID-19 deaths at deadline: nearly 100 more cases and twice as many deaths as the host regions of Pantex, Y-12, and Savannah River combined.

There were as of Friday 51 known cases of COVID-19 across the entire NNSA complex: the three weapons laboratories, the three production plants, the Savannah River Site, agency headquarters in Washington and the Albuquerque complex.

“While NNSA is prioritizing mission essential operations, we continue to follow guidelines specified by the White House, Office of Management and Budget, Department of State, Department of Homeland Security, and the Centers for Disease Control and Prevention,” NNSA headquarters wrote in a statement this week.

Editor’s note, 4/10/20, 5:13 p.m. Eastern time. The story was changed to indicate that the Kansas City National Security Campus has not gone to minimum mission-critical operations, but that it has reduced the number of personnel working on-site.