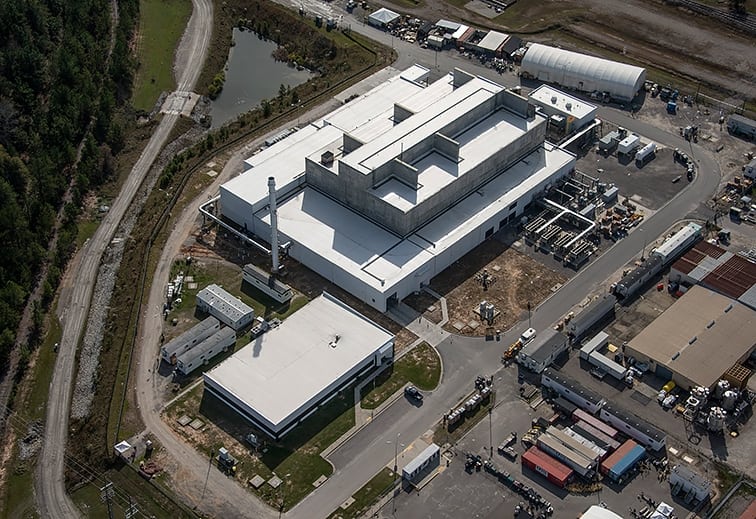 Reductions in on-site staffing triggered by DOE efforts to slow the spread of the coronavirus have suspended virtually all physical work by Fluor Idaho on the Integrated Waste Treatment Unit, a state official said this week. Meanwhile, records indicate a similar situation with a salt waste disposal unit being built at Savannah River.

With nearly all DOE cleanup sites shrinking their on-site staffing to bare bones levels for over a month now, the opening of these capital projects might slip – although the federal agency is quietly working on plans for shift back toward normal operations and a group of contractors has drafted a white paper to assist in restart planning.

An Idaho state official expects INL to take its first baby steps on staffing back up next week, with something akin to normal work levels possible by mid-June.

Progress on the IWTU is on hold “as much of the work requires materials/contractors from outside Idaho and some confined space work (or other tasks where social distancing is not possible),” Brian English, hazardous waste permitting manager for the Idaho Department of Environmental Quality (DEQ), said by email.

An Energy Department spokesperson in Idaho could not immediately be reached for comment to discuss details of the materials and contracting challenges.

Since late March, INL and Fluor Idaho have been limited to “essential mission critical” activities. That means most construction at the IWTU was placed in a “safe configuration,” with preventive maintenance temporarily suspended, according to an April 3 site report from the Defense Nuclear Facilities Safety Board (DNFSB).

The Energy Department hopes by the end of 2020 to start operating the IWTU, the long-awaited facility to turn sodium-bearing waste into a more stable form for disposal. Originally scheduled for startup in 2012, the facility never worked as planned, but Fluor Idaho has modified the plant over time to fix problems and is buoyed by positive tests in 2019. The current project cost of the IWTU is roughly $1 billion.

The Energy Department previously said IWTU “readiness” efforts were continuing, but did not specify how much of that actually involved work on-site.

About 450 members of Fluor Idaho’s typical 1,800-member workforce at the Idaho National Laboratory remain on-site, with another 450 teleworking, according to the Energy Department. The rest are receiving paid leave while unable to get on-site.

As of Thursday, the Idaho National Laboratory reported no positive case of coronavirus infection.

Fluor Idaho is continuing to package transuranic waste bound for DOE’s Waste Isolation Pilot Plant in New Mexico, along with processing a debris waste stream at the Advanced Mixed Waste Treatment Project, according to the DNFSB memo.

The Idaho National Laboratory has not filed any return to work plans with the state, English said, adding that it is not required to inform the DEQ about its staffing plans.

The Idaho facility should begin Phase I of a return to work plan next week, English said Friday. Operations will begin with those tasks that allow social distancing and other safe work practices including use of masks and increased hand washing. “The facility hopes to return to near normal operations over the next six weeks barring a resurgence of COVID-19,” he stated.

There is no mention of a planned phase return to work on webpages for INL or Fluor Idaho. Overall, DOE officials have been unwilling to be pinned down on return-to-work plans.

Energy Secretary Dan Brouillette released a statement late Friday saying an advisory panel is being formed to help create back-to-work procures. “I want to assure you that the Department will use a deliberate, data-driven process for a phased return to the physical office space when the time is right.”

The energy secretary added that returning to work will be “a complex process.”

The Hanford Site in Washington state will remain in essential-mission-critical operations for at least another week, Site Manager Brian Vance announced in a Wednesday web posting. Only 20% or some of Hanford’s normal 11,000-person workforce are believed on-site these days.

Reduced staffing caused by the COVID-19 pandemic also forced the Department of Energy to suspend construction of the Saltstone Disposal Unit 7 (SDU 7) at the Savannah River Site, the DNFSB said in a recent report.

The April 3 staff report filed with DNFSB Technical Director Christopher Roscetti noted that fewer than 2,500 workers were on-site at the time at Savannah River due to concerns about the virus. Under normal circumstances, SRS has a combined federal and contractor workforce of roughly 11,000.

Altogether, about 35 million gallons of radioactive salt and sludge waste is stored in more than 40 tanks at SRS. The waste, left over from Cold War nuclear weapons production, is 90% salt waste and 10% sludge. The Energy Department has previously indicated the $159 million disposal unit should be completed in spring 2022.

These dark cells house the main processing vessels and will be high radiation areas and are designed for little if any worker access. Workers still need to make some final welds on access covers for tanks located in the dark cell rooms, a spokesman for contractor Parsons said by email.

As recently as March, DOE and Parsons envisioned the facility beginning operations in April. Due to the COVID-19 pandemic, the department is re-evaluating that schedule.

Meanwhile, the Energy Facility Contractors Group (EFCOG) has drafted an 11-page white paper to identify best practices as DOE nuclear cleanup sites plan to get back to business while simultaneously trying to curb the spread of the virus.

The memo emailed Thursday to members, and obtained by Weapons Complex Monitor, focuses on five principles – a phased approach to resuming more normal operations; tailoring site plans to accommodate government COVID-19 guidelines and the prevalence of local cases; use of personal protective equipment and risk reduction tactics; “triggers” for extra safety steps; and mandatory training on expectations before staff starts returning to work in large numbers.

Companies are not merely going to say everybody show up for work tomorrow, an executive with a major DOE contractor said this week.

Overall, the white paper stresses there will be increased use of face masks and social distancing, staggering of shifts will be considered to reduce the number of individuals clustered in given areas, contractors and DOE will look for ways to reduce touching at places like building entries and security checkpoints.

The group, which consists of more than 100 Energy Department contractors, commonly works to share information on best practices and hopes the new white paper, will be a “living document” on safety at government facilities, an EFCOG member said Friday.

In the memo, EFCOG said employees should be required to watch a Center for Disease Control and Prevention video on how the virus is spread before returning to work. The group said many of the steps outlined are being implemented at National Nuclear Security Administration (NNSA) sites such as the Pantex Plant in Texas and the Y-12 National Security Complex in Oak Ridge, Tenn.

The EFCOG white paper envisions modified work conditions in which employees periodically have their temperature checked, carpooling to work is no longer encouraged, and on-site cafeteria meals become “grab and go.”

The contractors group said the memo attempts to answer the potential work question of “what has changed since March 20 to make it safe for me to return?” Most DOE cleanup sites starting moving to reduced staff levels in late March.

For the short term at least, the maximum practical level of telework should continue at sites, EFCOG said in the memo. The organization adds that many problems remain ahead – like instances where an on-site employee contracts the disease, and how to deal with staffers afraid to come back to work.