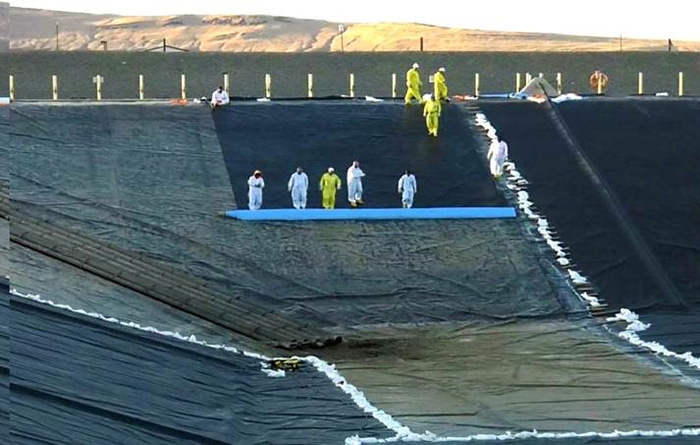 The Energy Department plans to take “corrective action” over concerns about its May award of a $13-billion long-term Tank Closure Contract at the Hanford Site in Washington state to the BWX Technologies-led Hanford Works Restoration.

“Following our investigation and addressing other issues as appropriate, DOE will make a new award determination,” James Jurich, an attorney with DOE’s Office of the General Counsel, wrote in a July 22 letter obtained by Weapons Complex Monitor.

He did not discuss what that might involve, but sources said this could lead to the undoing of the contract award.

“They may scrap it and start all over,” one industry source said Wednesday. Other sources said additional options open to DOE include requesting updated offers from the bidders, awarding the contract to a different bidder, or again concluding Hanford Works Restoration offers the best package.

The Energy Department declined to discuss the matter.

The letter, evidently a follow-up to a conference call earlier in the day, was addressed to Glenn Wolcott, an attorney for the Government Accountability Office (GAO).

As it reconsiders the award, the Energy Department requested the GAO dismiss protests by two contractor teams that lost out in the competition. The Government Accountability Office posted notices on its public website the following day saying it was dismissing the challenges.

On May 12, the Energy Department announced its award of the potential 10-year contract to the joint venture comprised of BWXT, Fluor, and two smaller firms, Intera and DBD. Protests were filed days later by the two other joint ventures — one comprised of Atkins, Amentum, and Westinghouse, and the other apparently consisting of Jacobs, Honeywell, and Perma-Fix Environmental Services.

As is standard practice in GAO filings, neither the initial protests nor the dismissal notices posted last week contain any details about the dispute. Public details about contract challenges typically are only disclosed after the case has been contested and the federal watchdog agency publishes a decision that still withholds certain confidential business information.

In his letter, Jurich wrote the Energy Department would do “further investigation into whether Mr. Doug Shoop gave the awardee an unfair competitive advantage or created an appearance of impropriety.” Shoop retired as DOE’s manager of the Richland Operations Office at Hanford in February 2019. He is currently working with Richland, Wash.-based Independent Strategic Management Solutions Inc., according to the ISMS website.

Jurich did not indicate what role Shoop might have played in the tank contract procurement.

“Shoop is a good guy,” smart and respected, another industry source said Thursday. Evidently, he played some type of consulting or advisory role connected to the BWXT group’s proposal, the source said. The industry representative said it is common for former DOE managers to do work for contractors after they leave government service – although there are restrictions placed on actions by ex-federal employees designed to keep them at arm’s length from projects they worked on within the government.

A phone call to Shoop’s current firm was not returned.

Tank waste operations at Hanford are overseen by DOE’s Office of River Protection. Energy Department awards are made by a source selection authority, usually a contracting officer, based on a comparative analysis of proposals by a source evaluation board.

The Energy Department lawyer said DOE would notify proposal offerors once any corrective action is completed. The agency gave no indication how long that might take.

BWXT spokesman Jud Simmons declined comment on the status of the award, “but I can tell you that we remain highly committed to the Hanford tank closure mission as an important element of the DOE’s environmental management program.”

This is the second major EM tank waste management procurement in the past three years that has run into trouble. In October 2017, the nuclear cleanup office awarded a $4.7 billion contract at the Savannah River Site in South Carolina to Savannah River EcoManagement, also led by BWXT.  A contract protest was filed and subsequently sustained by the GAO, which decided the Energy Department failed to adequately vet the technology being proposed by the winning team. To address the GAO ruling, the agency took updated bid proposals from the vendor teams – only to ultimately cancel the SRS waste procurement in February 2019 and keep the current contractor in place.

The Energy Department has indicated an RFP for a new Savannah River waste contract might be issued later this year.

With the memory of the SRS experience fresh in the minds of DOE managers, canceling another large waste management contract is probably the last thing the department wants, another industry official said by phone Tuesday.

“They will figure out a way to uphold the decision” and leave the award with the BWXT group, another industry source by phone Thursday.

Within the past year, the Energy Department has stuck with a vendor that had its initial contract award put on hold by DOE following a bid protest.

In December 2019, GAO said it found no reason to undo a $137 million technical services contract to Pro2Serve subsidiary  Enterprise Technical Assistance Services (E-TAS) at the Portsmouth/Paducah Project Office. As in the case with the current Hanford tanks procurement, the DOE initially put the brakes on the first award to ETAS after questions were raised in a bid protest by industry rival, Strategic Management Solutions Inc. (SMSI).

Amentum-led Washington River Protection Solutions is the current tank manager at Hanford. It holds a $7.8 billion contract that began in October 2008 and is set to expire Sept. 30, although DOE has announced plans to extend it for up to another year.