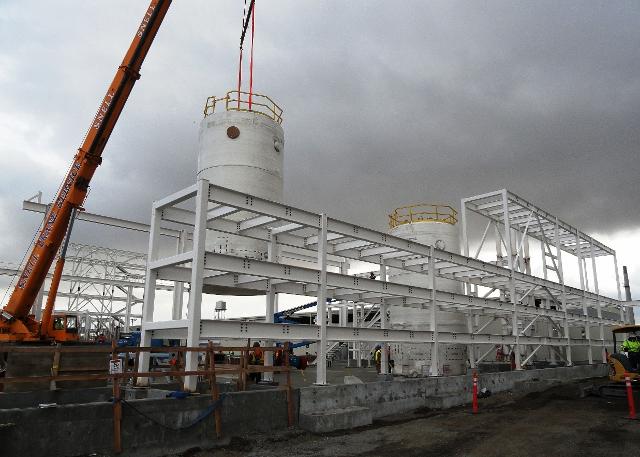 The Department of Energy confirmed this week that the Savannah River Site in South Carolina, as well as the cleanup vendor at the Nevada National Security Site, are gradually restarting operations scaled back two months ago to curb the spread of COVID-19 among workers.

At press time Friday, there have been 32 confirmed cases of coronavirus infections at the 16 nuclear remediation sites overseen by the DOE Office of Environmental Management.

About two-thirds of those cases, 22, were reported at the Savannah River Site, although 13 of the infected individuals have recovered and gotten the green light to return to work, officials said. The figures represent cases for both cleanup and National Nuclear Security Administration operations at Savannah River, a spokeswoman said, declining to provide a breakdown.

Sources did not offer any theories on the cause of the number of cases at the South Carolina complex.  The Savannah River Site and the Hanford Site in Washington state both host about 11,000 workers, but the latter facility as of Friday had identified only five confirmed cases of novel coronavirus 2019.

Five Environmental Management sites have started to recall workers who have been at home, either teleworking or collecting paid leave, since late March when the complex largely shifted to skeleton staffs for essential mission-critical operations.

Hanford, the Idaho National Laboratory, and the Oak Ridge Site in Tennessee had already started the process of calling back certain key people to the workplace. Hanford and Oak Ridge started this week while Idaho started a week earlier.

The Energy Department on May 18 published a framework for gradually returning headquarters operations to full staffing. This framework, which provides the template for cleanup sites to follow in remobilization, is notably free of any timetables or details on when specific numbers of employees should return to work.

The four-part approach starts with Phase 0, or sanitizing worksites and preplanning. Phase 1 entails the return of key employees who don’t require much personal protective equipment – typically because they work in offices or classified settings. Phase 2 sees more people coming back, including senior management; finally, in Phase 3, virtually everyone will resume pre-COVID-19 work schedules.

All of this is premised upon what DOE refers to as “gating” criteria, or local coronavirus-related health data, along with guidance from local, state, and federal governments.

The Moab Uranium Mill Tailings Reclamation Action (UMTRA) project in Utah, where many employees are heavy equipment operators who already work at distance from one another, has largely maintained normal staffing levels during the pandemic.

There was also speculation this week that the Waste Isolation Pilot Plant (WIPP) near Carlsbad, N.M., could soon start bringing more people back to ramp up waste emplacement, but this could not be confirmed by press time.

Navarro Research and Engineering manages environmental remediation at the sprawling Nevada National Security Site. Its work includes permanent disposal of low-level and mixed radioactive wastes from across the DOE weapons complex, as well as regulatory compliance and monitoring of the air, land, water, plants, animals, and cultural resources. Navarro officials could not immediately be reached for comment Friday.

Officials have said probably only a quarter of the total Savannah River Site workforce has been on-site since the complex sent most workers home in late March.

The Savannah River Site has started Phase 1 callbacks, under which about 2,000 people will gradually return, a spokeswoman said by email. The DOE guidance does not provide any timelines and stresses planning is subject to change depending on health trends and future outbreaks.

During Phase 1, contractor Parsons will resume some on-site startup operations on the Salt Waste Processing Facility, according to DOE. Pre-pandemic, the facility was supposed to be online by early April. The Energy Department is “is continuing to analyze the potential impacts of the pandemic on project and regulatory milestones,” according to a Savannah River Site press release.

Only roughly one-quarter of the Hanford workforce has also been inside the fence the past two months. Hanford started recalling certain people on Tuesday and the process will continue this coming Monday, June 1. Supervisors will inform employees who should plan to report to the workplace.

Construction of the Hanford Waste Treatment Plant by Bechtel involves almost 3,000. Roughly only 300 of those workers have been on-site recently, a company spokesperson said by email.

Los Alamos Not Ready to Restart Yet

Bare-bones staffing for nuclear cleanup at the Los Alamos National Laboratory (LANL) in New Mexico won’t be lifted before May 31, a Department of Energy official said last week.

Legacy cleanup at the site is managed by Newport News Nuclear BWXT Los Alamos (N3B) under a 10-year, $1.38 billion contract. The joint venture employs about 700 people, but most are either working remotely or collecting paid leave.

“We typically only have 10 to 20 N3B personnel on site” during this minimum operations period, which started March 24, Johnson said.

In addition, one or two federal employees remain on-site to monitor N3B these days.

“Things are starting to open up across the country,” but Los Alamos officials are not ready to publicly discuss potential return-to-work timelines, Johnson said.

Despite the reduced staff, N3B and Los Alamos have not slipped behind on key remediation milestones, although the contractor could need more time to file certain reports with the state that would otherwise be due Sept. 30, Johnson said. He did not specify precisely what type of report.

Johnson was named EM-Los Alamos acting manager in March after the retirement of Manager Doug Hintze. Johnson is a 39-year federal government employee who started out with the U.S. Army Corps of Engineers and has been with DOE since the 1990s. Johnson comes to Los Alamos after serving as deputy manager at the Savannah River Site in South Carolina since September 2018.