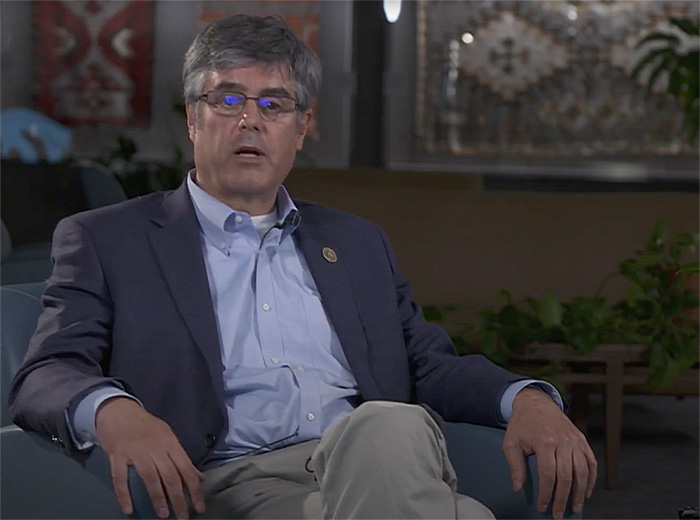 Workers who secure a religious exemption to the Los Alamos National Laboratory’s COVID-19 vaccine mandate will be barred from the lab and allowed only to go on vacation or take leave without pay until they quit their jobs or get vaccinated, according to an all-hands memo from lab Director Thomas Mason.

“On October 15, staff who have been granted a religious exemption will be placed on [leave without pay] status or may use vacation until the Laboratory determines the threat of COVID-19 has diminished sufficiently to allow them to return to work,” Mason wrote in the Sept. 20 memo, the text of which Nuclear Security & Deterrence Monitor saw this week.

Anyone who does decide to begin a COVID-19 vaccination regime by Oct. 1 will be allowed to continue work as normal, “provided they comply with all requirements related to COVID-19, including prompt completion of the vaccination process,” according to Mason’s memo.

Those who don’t inform the lab about their vaccination plans by Oct. 1 will be fired, Mason said.

The lab’s mandate applies to all employees and subcontractors of Triad National Security, the three-way partnership of Battelle, the University of California and Texas A&M University that manages the lab under contract to the Department of Energy’s National Nuclear Security Administration (NNSA). Even employees who only telework have to get the vaccine.

In August, two weeks before President Joe Biden ordered federal employees and contractors to get vaccinated, Los Alamos became the first civilian nuclear-weapon site to publicly mandate COVID-19 vaccinations for its employees. The move drew a literal protest weeks later, the same week the Biden administration handed down its order that contractors get the vaccine or hit the street. NNSA leadership cheered the mandate.

In his memo to staff, Mason said the lab granted a “small number of medical exemptions” to the vaccine mandate, and that the lab was “working to put in place appropriate accommodations as prescribed by the Americans with Disability Act.”

About 85% of Los Alamos’ workforce had been vaccinated by the time the lab mandated vaccines in August, and another 1,000 people got vaccinated after that, Mason’s memo said.

Following Biden’s executive orders, federal employees at the Department of Energy have until Nov. 8 to get fully vaccinated against COVID-19. Federal contractors government-wide have until Dec. 8 to get vaccinated, according to a guidance released last week by the Safer Federal Workforce Task Force.

Overall, the nuclear weapons laboratories were at deadline outpacing production sites when it came to vaccinating their workforces, according to the most recent data shared by NNSA labs, plants and sites.

At the Sandia National Laboratories, which has one of the largest workforces in the nuclear security enterprise, about 84% of the workforce had been vaccinated as of the week ended Sept. 17, a spokesperson for the Albuquerque-based labs network told Nuclear Security & Deterrence Monitor this week.

In raw numbers 14,345 Sandians were vaccinated as of Sept. 24, the most recent period for which the labs have publicly disclosed data. The figure counts not only employees of the site management and operations contractor, the Honeywell-owned National Technology and Engineering Solutions of Sandia, but staff augmentation contractors and student interns, among others.

Of the three nuclear weapons laboratories, Sandia had at deadline disclosed the most data about vaccinations among its workforce. Los Alamos National Laboratory in New Mexico, the only lab at deadline to make vaccinations a condition of employment for contractor employees, said in August that more than 85% of its workforce of about 8,900 had been vaccinated against COVID-19. With the extra 1,000 vaccinated since the mandate, holdouts would number in the hundreds. Triad National Security, led by the Battelle Memorial Institute with the University of California and Texas A&M University, manages the lab.

Of the non-laboratory NNSA sites reporting data, the Y-12 National Security Complex in Oak Ridge, Tenn., had the highest rate of vaccination at more than 75%, as of the week ended Sept. 24. That’s according to site prime Consolidated Nuclear Security, another Bechtel National-led team.

The Nevada National Security site was next, with about 70% of its roughly 2,900-strong workforce vaccinated as of Friday. That’s according to a statement from the site’s Honeywell-led prime contractor, Mission Support and Test Services.

The Pantex Plant in Amarillo, Texas, clocked in with the lowest share of fully-vaccinated workers of any non-lab NNSA site that shares data, with Consolidated Nuclear Security reporting about 58% fully vaccinated as of the week ended Sept. 17. Pantex and Y-12 are managed under one contract.

The Kansas City National Security Campus, managed by the Honeywell-owned Honeywell Federal Manufacturing & Technologies, has declined to say how many of its 5,000 employees have been vaccinated.