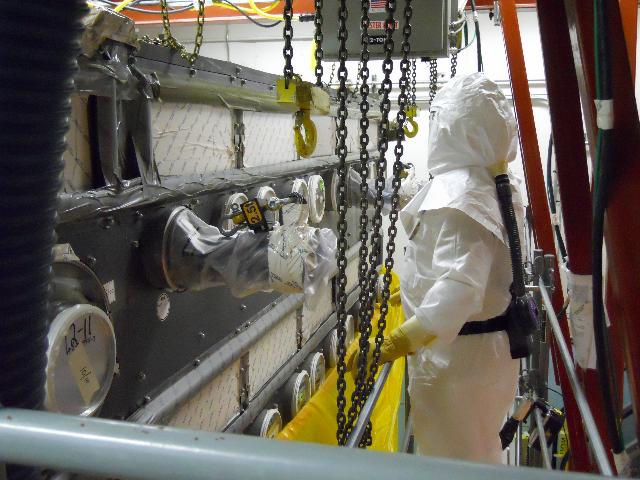 The Donald Trump administration on Monday requested $6.1 billion for the Energy Department Office of Environmental Management during fiscal 2021, which would be an 18% reduction from the $7.5 billion enacted by Congress in the current budget year.

It also represents a $400 million slice from the $6.5 billion the White House sought last March for DOE nuclear cleanup at 16 Cold War and Manhattan Project sites. Congress eventually bumped that up for the budget year starting Oct. 1, which has been the annual pattern for Environmental Management thus far during President Donald Trump’s term in office.

The administration this week released top-line figures for the $35.4 billion DOE budget proposal, which is about 8.1% less than the 2020 enacted level of $38.5 billion.

The fully detailed budget package with more site-specific information had yet to be released as of press time Friday.

The Energy Department, in budget documents released so far and in a conference call between agency leadership and reporters, did not offer any real explanation for the reduced numbers for Environmental Management.

A DOE contractor offered a different view Thursday, saying Environmental Management might not need as much cash this year after the $7 billion-plus budgets from the past couple years. Securing a skilled workforce and necessary equipment can only happen so quickly, and some operations are behind in spending current funds, he added.

Several, but not all, of the 16 properties overseen Office of Environmental Management would receive less money during the upcoming fiscal 2021 than they do in the current budget, under the spending proposal. Numbers for certain locations have yet to be released yet, but should be included when DOE issues its granular tables for the Office of Environmental Management budget.

Combined funding for the two offices for the Hanford Site in Washington state would drop from roughly $2.5 billion in the 2020 enacted budget to $1.9 billion in the DOE request.

But spending at the Savannah River Site in South Carolina would grow on a year-over-year basis from nearly $1.5 billion to $1.7 billion.

The Energy Department said in the budget in brief released this week that funding will be sufficient for slab and soil remediation at the East Tennessee Technology Park, a former uranium enrichment complex, as well as for continued design of a new waste landfill to take debris from the Oak Ridge National Laboratory and Y-12 National Security Complex.

“As a member of the House Appropriations Committee I will continue to do all I can to ensure that the site receives the funding that it needs for the next fiscal year,” Rep. Chuck Fleischmann (R-Tenn.), whose congressional district covers parts of Oak Ridge, said in an emailed statement.

The request for the Waste Isolation Pilot Plant near Carlsbad, N.M., is $390 million for fiscal 2021, down from the enacted, and requested, $397 million in fiscal 2020. That would support $50 million toward sinking a new underground utility shaft to provide additional access for equipment and materials to the 2,100-feet deep repository for defense-related transuranic waste.

Idaho National Laboratory remediation funding would drop from about $434 million in fiscal 2020, equal to the budget request for the funding cycle, to $271 million. The Energy Department said the money would support operation of the long-awaited Integrated Waste Treatment Unit for sodium-bearing waste, as well as continued shipments of transuranic waste to WIPP.

Remediation funding for the Los Alamos National Laboratory in New Mexico would fall from $220 million to $120 million for the budget starting Oct. 1. The requested amount for fiscal 2020 was $195 million. The administration’s budget material says this year’s request is sufficient to control a hexavalent chromium plume located between two local canyons and address other soil or water contamination issues.

The Portsmouth Site in Ohio would receive $491 million in fiscal 2021 under the request, which represents its total funding drawn from UED&D, defense environmental cleanup, and safeguards and security. That would rise from $418 million enacted in fiscal 2020, which came after the White House proposed $356 million last year. The funding will help decommissioning of old uranium enrichment facilities and construction of an on-site waste disposal cell, according to the request.

The Paducah Site in Kentucky would receive $282 million under the request, up from the $240 million for fiscal 2020 and DOE’s $207 million request for the current year.

The Nevada National Security Site would receive $61 million in Environmental Management money under the current request, or roughly what it has received during fiscal 2020.

Likewise, the Separations Process Research Unit in New York would continue to be funded at $15 million, in line with appropriations for the last couple years, including fiscal 2020.