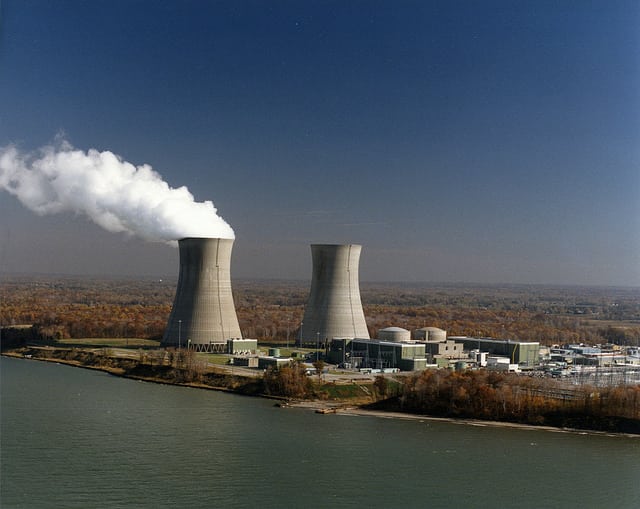 Teetering on the brink of bankruptcy, FirstEnergy Solutions announced Wednesday it would close its four nuclear power reactors in Ohio and Pennsylvania in coming years if it does not get rapid assistance from the federal and state governments.

Davis-Besse’s closure is scheduled for May 2020, said Tom Mulligan, a spokesman for the Akron, Ohio-based power company. The Perry plant is due to shut down in May 2021. The two Beaver Valley reactors are lined up to end operations in May and October 2021.

The four reactors’ operations licenses from the U.S. Nuclear Regulatory Commission are not scheduled to expire until different times between 2026 and 2047.

“Though the plants have taken aggressive measures to cut costs, the market challenges facing these units are beyond their control,” Don Moul, president and chief nuclear officer of FES Generation Cos., said in a Wednesday news release.

The reactors are no longer cost-effective due to numerous economic pressures, FirstEnergy Solutions said Thursday in a 44-page memorandum to U.S. Energy Secretary Rick Perry. Those pressures include bankruptcy becoming likely any day.

The Akron Beacon Journal reported FirstEnergy Solutions is on track to default on a $100 million bond in April. Mulligan declined to discuss the report.

A Feb. 20 FirstEnergy Solutions filing with the U.S. Securities and Exchange Commission also discussed the corporation’s weak financial condition strongly increasing the likelihood of defaults and bankruptcy. In the document, the company blamed numerous factors that included low wholesale electricity prices, weak demand, cash flow issues, debts, and “the inability to obtain legislative or regulatory relief.” FirstEnergy’s letter to Perry requested such financial and regulatory help from the Department of Energy.

Specifically, the company has filed a formal application under the Federal Power Act for Perry to order PJM Interconnection — the regional wholesale power transmissions agency that receives the Akron corporation’s electricity —  to immediately begin negotiations to use the long-term capacity of some nuclear and coal plants. The request also calls to compensate plant owners “for the full benefits they provide to energy markets and the public at large, including fuel security and diversity,” according to a FirstEnergy Solutions press release.

FirstEnergy contends that the impending closure of its plants threatens the long-term robustness of the region’s electric grid. It argues its plants still have many years of potential life as generators, but cannot economically compete under current market conditions.

The Energy Department said it would review the request, while PJM rejected the existence of an emergency as described by FirstEnergy, Politico reported.

“We call on elected officials in Ohio and Pennsylvania to consider policy solutions that would recognize the importance of these facilities to the employees and local economies in which they operate, and the unique role they play in providing reliable, zero-emission electric power for consumers in both states. We stand ready to roll-up our sleeves and work with policy makers to find solutions that will make it feasible to continue to operate these plants in the future.” Moul said.

Mulligan also declined to discuss FirstEnergy’s plans for the next two to three years of preparations for the plant shutdowns, the company’s approach to decommissioning, and matters relating to spent nuclear fuel at each location.

The NRC said by email FirstEnergy has “trust funds (for decommissioning) for each of these reactors – required before startup – and those funds meet our requirements.” FirstEnergy’s Feb. 20 SEC filing said the corporation has $2.7 billion set aside for site cleanup purposes.

The four reactors have adequate space to store their spent nuclear fuel, the SEC filing said.

When a reactor is shut down, the owner has two years to prepare a formal report that will include cost estimates and approaches for decommissioning, as well as spent fuel management plans.  “Since FirstEnergy is announcing these shutdowns well in advance, they have plenty of time to get an advance start (on the reports due two years after the shutdowns),” according to the NRC.

As soon as workers remove the reactor’s fuel, its NRC license automatically changes from an operating license to a possession-only license.