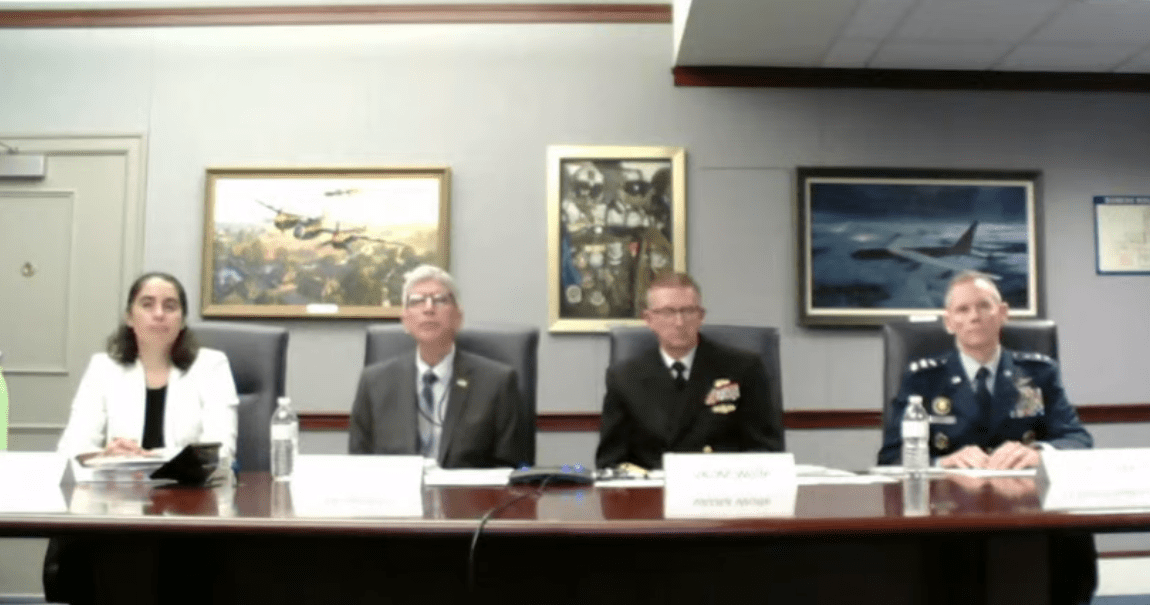 With the planned Savannah River Plutonium Processing Facility (SPPPF) up to five years behind scheduled, “based on our latest information we assess that meeting the 2030 [deadline] … is not going to be achievable,” Charles Verdon, the acting administrator of the National Nuclear Security Administration (NNSA), said in the final minutes of a hearing of the House Armed Services strategic forces subcommittee.

That cat had been part way out of the bag since late May, when Jill Hruby, the Joe Biden administration’s nominee to be the NNSA’s permanent administrator, told the Senate Armed Services Committee that SRPPF at the Savannah River Site in Aiken, S.C., would be as many as five years late.

Verdon’s testimony Thursday, however, clarified that without the SRPPF — to be built from the partially constructed Mixed Oxide Fuel Fabrication Facility in Savannah River’s F-Area — the NNSA’s other planned pit plant, at the Los Alamos National Laboratory, cannot shoulder the load on its own by 2030.

Both pit plants are eventually supposed to be capable of surging their manufacturing capacity and staff to single handedly produce the needed 80 pits annually, but the NNSA has not said when that might be possible.

At least, Verdon said during the hearing, the NNSA is “highly confident” that the Los Alamos plant, an expansion of the site’s PF-4 Plutonium Facility, will be able to produce 30 war-ready pits annually starting in 2026. SRPPF was supposed to add another 50 a year in 2030, but that has now slipped to 2032 or 2035, Verdon said Thursday, repeating what the NNSA disclosed May 28 in its detailed 2022 budget request.

U.S. law requires the NNSA to make at least 80 war-usable pits by 2030. Every year by March 1, the Secretary of Energy is supposed to certify to Congress that the NNSA is on track to hit that deadline. If the Secretary of Energy can’t certify that, the Department of Defense, through the Nuclear Weapons Council, is allowed to tell Congress, by May 1, what parts of DOE should have their budgets cut to funnel more money into construction of the NNSA’s pit enterprise.

“DOE last provided this certification to Congress in December 2020 through the FY 2021 Stockpile Stewardship Management Plan,” a spokesperson for National Nuclear Security Administration headquarters wrote in a Friday email to Nuclear Security & Deterrence Monitor. “DOE-NNSA senior leadership transparently informed relevant Congressional committees and the Department of Defense of its ongoing assessment of pit production capabilities and potential timelines to achieve 80 pits by 2030 and the path forward, and will continue to do so.”

It wasn’t clear at deadline how Verdon’s testimony this week had altered the circumstances DOE and NNSA reported to Congress in the 2021 Stockpile Stewardship and Management Plan, which contains a classified annex. That document went to Congress months before Savannah River Site turned in SRPPF’s critical decision 1 report, which revealed the cost and schedule growth Hruby and Verdon have since testified about, to NNSA headquarters.

In the unclassified version of the 2021 Stockpile Stewardship and Management Plan, prepared in 2020, the NNSA wrote that the Nuclear Weapons Council had certified that “DOE/NNSA remains on track to … produce no fewer than 80 pits per year during 2030,” and that the agency would “assess opportunities for LANL to produce above that quantity to help reduce schedule risk associated with pit production at the Savannah River Site.”

At deadline this week, Congressional aides told the Monitor they had not received any list of recommended DOE cuts from the Nuclear Weapons Council.

“Given that the President’s budget request for Fiscal Year 2022 was delivered to Congress on May 28, a May 1 delivery date was not met, unsurprisingly,” an aide for the House Armed Services Committee said Friday. “As was noted in [Thursday’s] hearing, the committee is awaiting the full scope of information that will be captured in the Department’s Critical Decision 1”  for SRPPF.

An aide for the Republican minority said Thursday that the Senate Armed Services Committee had not received any communication from the Pentagon as of Thursday about which parts of DOE the Nuclear Weapons Council thinks could be cut to provide more funding for pits in fiscal year 2022 or beyond.

The Savannah River pit plant will cost about $11 billion to build, the NNSA said in its latest budget request: nearly two-and-a-half times as much as a preliminary estimate dating back at least to 2018. More details might emerge when, or if, the NNSA releases the report on the facility’s critical decision 1 review.

The Los Alamos pit plant will cost about $4 billion to build, the NNSA estimated in April, quoting figures from the project’s critical decision 1 review. In 2018, the NNSA estimated that it would cost some $30 billion to operate both plants for about 50 years, but that calculation did not include the greater-than-anticipated cost of the Savannah River Facility.

Both NNSA pit plants will initially produce plutonium cores for W87-1 style warheads, one of two planned tips for the silo-based Ground Based Strategic Deterrent intercontinental ballistic missiles the Air Force has ordered from Northrop Grumman to replace the current fleet of Minuteman III missiles. W87-1 will replace the current W78 warhead.

The Air Force plans to order more than 650 Ground Based Strategic Deterrent missiles. Acquisition costs will be at least $95 billion, while total life cycle costs could reach $264 billion, according to government estimates.

Progressive Democrats in the House and Senate and progressive voices from outside of government have called for slowing down or shrinking the Ground Based Strategic Deterrent program and relying in the near-term on a life-extended Minuteman III fleet. The Biden administration has for now rejected the call, requesting funding to keep the program more or less on schedule.

However, the Biden White House’s long-awaited Nuclear Posture Review — to be published around January — might call for significant changes to land-based nuclear forces. If the review arrived in January, it would be in time to serve as the basis for a nuclear-weapons budget that looks much different from what Biden seeks for 2022. The review has not started yet, but is “on the cusp,” Melissa Dalton, acting assistant secretary of defense for strategy, plans, and capabilities, said at Thursday’s hearing. It was Dalton who said the posture review could arrive early next year.

The first planned test flight of a Ground Based Strategic Deterrent missile is scheduled for Dec. 1, 2023, from Vandenberg Air Force Base in California, Lt. Gen James Dawkins, the Air Force’ deputy chief of staff for strategic deterrence and nuclear integration, said during Thursday’s hearing.

The first Ground Based Strategic Deterrent missiles to go into silos and replace Minuteman III as on-alert parts of the U.S. nuclear arsenal will do so without new pits. The first batch of the next-generation intercontinental ballistic missiles will use W87-0 warheads, which will come right off of some of today’s Minuteman III rockets. The warheads will be modified for the new missiles and qualified via flight tests that, the Air Force has said, could start as soon as 2023 or 2024.

There are, notionally, multiple Ground Based Strategic Deterrent flight tests on the Air Force’s schedule for the 2023 and 2024 calendar years, according to an environmental impact statement the service published in February.